The Top 3 States To Start a Small Business 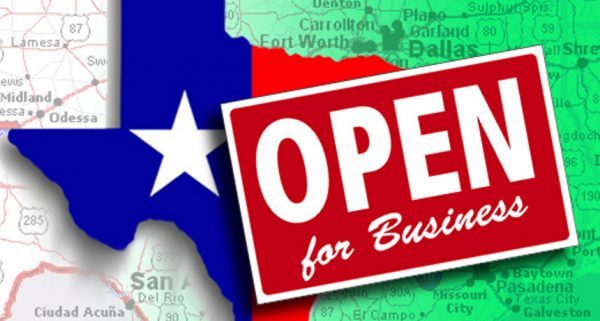 The Top 3 States To Start a Small Business

If you are considering starting a business there is no time like the present and there is no place like Texas!

Now is arguably one of the best times in history to start a new business. America is by far one of the best countries for entrepreneurs and small businesses. America is the land of opportunity and currently has a pro business president. The number of new business establishments in the U.S. has reached levels not seen since before the financial crisis. So, it seems now might be a great time to launch a company.

Here are the Top 3 States to start a business in:

Home to a vast energy industry — and possibly the next housing bubble— Texas provides fertile ground for opening a business. Along with California and Massachusetts, it’s one of the few states to have multiple clusters of major economic centers rather than just one or two, said Thornhill.

If you’re looking to start a business in the Lone Star State, you’ll be pleased to know Texas has a strong startup activity score. It ties for the fourth-highest rate of new entrepreneurs and also has the fourth-highest density of startup businesses. Plus, the cost of living here most likely won’t hurt your wallet.

Economic conditions strongly point to Nevada as one of the best states to start a business. The state’s startup activity score is the best in the U.S. And, Nevada tops the charts for the highest density of startups with more than 100 startup companies per 1,000 firm population.

Lastly, entrepreneurs will enjoy the highest percentage of available employees in the country.

If you’re looking to start a business and don’t mind the cold, Alaska could be a good fit. Despite the fact Alaska has 10 tax brackets for corporate income tax, according to the Tax Foundation, the business tax climate in Alaska is the third best in the U.S., especially since there’s no individual income tax or state sales tax.

There is one snag people starting a business should be aware of: Alaska has the worst level of education for potential employees in the country. Fortunately, Alaska’s positives more than make up for this.
.
We are Houston’s only end-to-end small business support center. We do everything from logo design to business loans. Astor Business Centers is located at 8145 Highway 6 S, Suite 138 Houston, Texas 77083. That is in Alief Texas between Sugar Land and Fort Bend Counties. We also have an office in London England. For more information call (3281) 826-9557